The EU is ready to co-finance our energy transformation ― what does the Polish government have to say?

On 17 July the European Council will launch the final negotiations on the EU budget, unprecedented in scale and intended to pull the EU out of recession and give it a new boost.

Since December 2019 Poland has been part of the EU discussions, trying to distance itself from climate neutrality in 2050. Although all other Member States agreed to it.

For the time being, however, it seems that we may be one of the countries that will benefit most from the distribution of funds―we may gain over PLN 140 billion for the energy transition alone. Yet, the money will not be granted unconditionally. Poland needs to have a plan in place to achieve the EU's common goals―to commit to climate neutrality and to contribute to a 40% or even 55% reduction in emissions by 2030.

The financial perspective that has just been presented is the last chance to give a new breath of fresh air to the Polish energy sector with the support of the European Union. Without a meaningful plan and backward to climate neutrality and European Green Deal, we will be left alone with all the energy problems―outdated coal infrastructure, high energy prices and polluted air.

The last six months in the EU have been subordinated to common action to stop the COVID-19 pandemic. Its effects in 2020 alone mean a reduction of 8.3% in the EU's GDP. Although symptoms of a rebound are already visible, the European Commission presented a plan to pump very large amounts of money into public and private investments. The condition for transferring the funds is to undertake investments which will not only bring prompt but also lasting effects. Among other things, they will help to overcome the climate crisis, improve air quality and increase energy security. They will serve generations.

The spectre of a long and deep economic crisis and the need to strengthen the European Union has mobilised the EU institutions to almost double the budget for the period 2021-2027. The Commission has put a proposal on the negotiating table which, in addition to the "normal" MFF funding of around EUR 1.1 trillion, includes an additional financial package―the Next Generation EU―worth  EUR 750 billion.

The direction in which the EU money is being spent has been clearly indicated: digital technologies and the transformation of the economy in line with the objective of EU climate neutrality. The new budget is linked to the implementation of the European Green Deal―a zero-carbon development strategy for the whole EU with turning points in 2030 and 2050.

30%: this is the proportion of the EU budget and Next Generation EU that will have to be spent on climate targets.

Although at the beginning of the pandemic it seemed to some people that the aim to reduce emissions and protect climate would decline, today we know that the opposite is true. The coronavirus has re-evaluated priorities and increased the pressure to act. In addition, the young generation has started to demand radical changes from decision-makers in recent years.

The EU plans fit well with Poland's priorities. Our coal and lignite is running out, imports are high. Coal-fired power plants are old, hence they do not emit a lot and produce expensive energy. Heating requires profound reconstruction. As the last country in the EU, we use so much coal in households for heating that in winter we have the most polluted air in the whole EU.

A key moment in the EU budget negotiations

The European Commission is now acting very quickly. The investment financing mechanisms are designed to mobilise funds within a few months in exchange for well thought-out plans. The rigid and short timeframe (2020-2023) for planning and mobilising the additional financial injection differs from the normal Union budget planned for the period 2021-27.

The first funds are expected to flow to Member States later this year, and the majority, at least 70% of the Resilience and Recovery Facility grants will be mobilised in 2021-2022. The remaining 30% from 2023.

So we have only a few months to showcase our thoughtful transformation plans. There are no such plans yet, because the government lacks consensus on the need for change, not to mention specific projects.

Countries that identify accurately and quickly the areas that are worth support when thinking about the future of their economy have a chance to obtain the most funds.

Moreover, it is to be expected that this year's budget negotiations will be closely linked not only to the climate neutrality target, but also to the discussion on the climate ambitions for 2030 and the raising of the reduction target from 40% to 50-55%. The Just Transition Fund, despite its relatively small size, will be a political bargaining chip in this discussion. And in three years' time, according to the global and EU calendar, Member States will for the first time sit down to discuss new targets after 2030. The direction of EU pro-climate action is therefore clear. Poland can join in and gain funding or be excluded from the distribution of EU money at our own request.

At least PLN 140 billion for the energy transformation for Poland

Poland can no longer say that our unique situation, i.e. our high dependence on coal, has not been noticed in the EU. Poland can gain over PLN 140 billion in basic financial instruments and more in additional programmes for the energy transformation alone. All in circumstances, in which the Commission's priority is to save economies threatened by the crisis. It is precisely in Poland, as the latest EC estimates show, that in 2020 the recession will reach 4.6% of GDP and be the lowest among Member States. However, for the distribution of money in 2021-2022, such economic indicators (e.g. GDP, public debt, unemployment) are used that will allow Poland to remain among the largest beneficiaries.

In the table below we present the sources of financing for the energy transformation in Poland and the conditions for their launch as proposed by the European Commission and the President of the European Council: 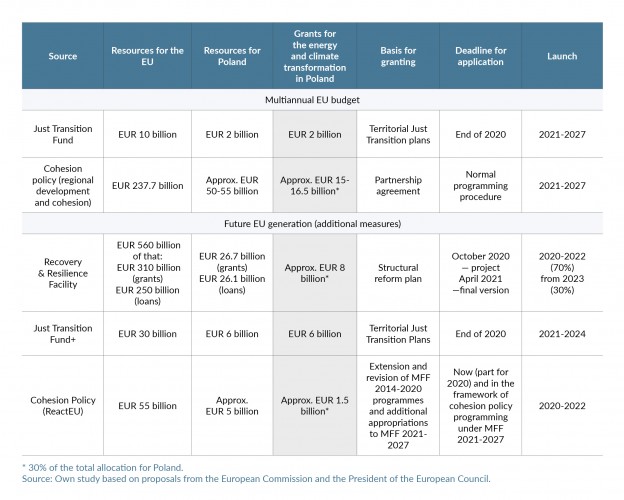 But that's still not all. Transformation funds are also in other EU budget lines, i.e. the Common Agricultural Policy and mechanisms for allocating funds through competitions (InvestEU, HorizonEurope, Connect Europe Facility, LIFE). Additionally, in countries with the lowest GDP, including Poland, low-carbon investments are supported from the Modernisation Fund (under the ETS system), and at the EU level, from the Innovation Fund. Many funds will be available as loans. They are also offered by the European Investment Bank.

So the Member States' race for EU money has started and we have only a few months to close ranks and draw up plans. In order to strengthen Poland in the negotiations, the first thing to do is to focus on the rapid planning of the spending of this money, where projects need to be submitted in principle already now. These are:

1) Recovery and Resilience Facility―here for climate change and energy transformation there are nearly PLN 36 billion in grants to be taken. The time to submit ready-made plans is only until 30 April 2021, because both the Commission and the EU Council want a quick effect: 70% of the funds from this instrument should be mobilised by the end of 2022.

We have even less time to prepare for the use of the JTF―here, also approx. PLN 36 billion has been allocated to Poland. The plans should be made by the end of December this year. It is necessary to commit to real transformation and show its stages by 2030. Therefore, although in Poland we have six voivodships which could theoretically benefit from JTF, currently three have a chance to receive money: Silesia, Lower Silesia (Wałbrzych) and Wielkopolska (Konin). So far only from these regions the EC has received credible declarations of transformation. Here, Poland's consent to climate neutrality will be crucial, as there will be no acceptance in the EU for granting Poland funds without plans to move away from coal.

The National Energy and Climate Plan for 2021-2030 must be the reference point for all energy transition projects. Although Poland sent this document to Brussels in December last year, it does not envisage the implementation of common EU objectives in 2030. Therefore, without rapid change, it will weaken Poland's position in the negotiations and deepen the chaos in the energy sector.

Investments that will give Poland an energy boost

The availability of such large but one-off resources is the best time to think boldly about the transition to a more modern economy. Investment in the energy sector and action for a low-carbon transition should take centre stage in this process. Poland has well defined priorities, which, among others, we have described in our studies (Energy Boost for Poland, Forum Energii and Lewiatan, 2020[1]):

The above projects are part of immediate actions that can be taken now and the results will be achieved quickly.

In addition, six areas require long-term actions to be initiated today. They have the potential to make a­ significant contribution to the development of the Polish economy over the next 5-10 years:

The preparation of a framework for projects in this area should become a priority for the next two years. Our analysis shows that the implementation of these measures will give Poland an investment impulse with a total value of over PLN 580 billion and help keep 270 thousand jobs.

The Polish economy and energy sector are on a bend, and in the European Union the fate of financing the investments that are key to development in the next 30 years is important. Poland cannot afford to stand on the sidelines and lack of decisions, which is due to the fact that as a country we still do not have any coherent strategy for transformation.

table - the sources of financing for the energy transformation in Poland