Up to 2 GW of additional power in summer peaks can be supplied by the existing heat and power plants to the National Power System (NPS). This is four times more than the capacity of the new Turów power plant unit, which is currently under construction. Such a potential lies in the production of network cooling, accumulation of heat, running in "condensation" mode (without heat production) and cogeneration. Reaching for these resources will improve the security of the energy system and reduce emissions to the environment.

Due to the climate, Poland is one of the European leaders in terms of the development of district heating networks. About 40% of the population of our country uses the system heat. However, EU leaders such as Latvia, Lithuania, Estonia and Denmark reach 60%. Is it worth joining this group? There are many arguments in favour of this. Not only do district heating networks provide central heating and hot water, but they can also balance NPS and, of course, improve air quality.

It is believed that cogeneration is only useful in winter when buildings need heating. Heat-producing blocks are closed in summer. At that time, they could be used for the production of cool, for which the demand in the services and food processing sector is estimated at 20 PJ.

In order to meet this demand with system heat, its production in cogeneration units should be increased by about 25 PJ 1, mainly in the period of higher air temperatures, i.e. from May to September. District cooling could be provided by cogeneration units with a capacity of about 0.8 - 1 GW, which are not used in summer. This additional thousand megawatts of power will allow for a better balance of the national energy system in a sensitive period of hot summers.  It is worth noting that the technological progress of refrigerating units makes the production of cooling more and more profitable, even with lower temperatures of network water during the summer, which until recently was the main barrier to the development of this technology.

The use of cogeneration in summer can be increased by increasing the capacity to accumulate heat. Today in Poland in CHP plants and heat plants with an installed capacity of 55.5 GW, we have a dozen or so batteries with a heat capacity not exceeding 1 GWt. This is a missed opportunity, as each 1 GW of heat is about 0.5 GW of additional electrical power directed to the NPS during peak demand hours. According to the estimates of Forum Energii, the potential of batteries is three times higher. Its release would result in a further 0.6 - 0.8 GWe increase in peak capacity. Reaching for this resource is less expensive than building new peak units needed to balance the NPS.

The following figure shows the principle of operation of a heat accumulator in a CHP plant.

Fig. 1a. Daytime operation of heat accumulator in CHP plant 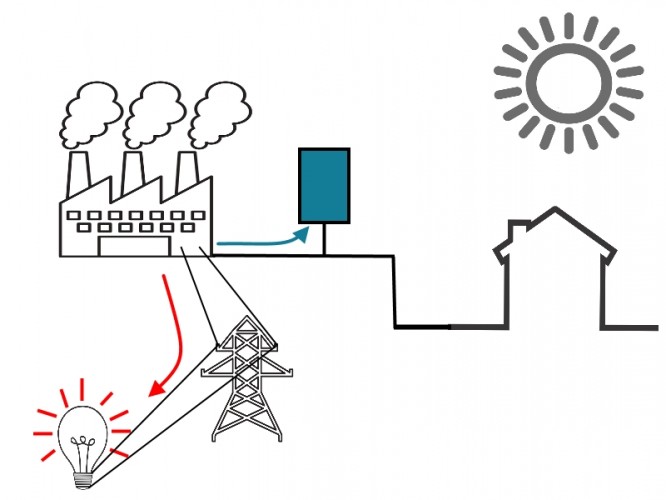 Fig. 1b. Night-time operation of the heat accumulator in the CHP plant 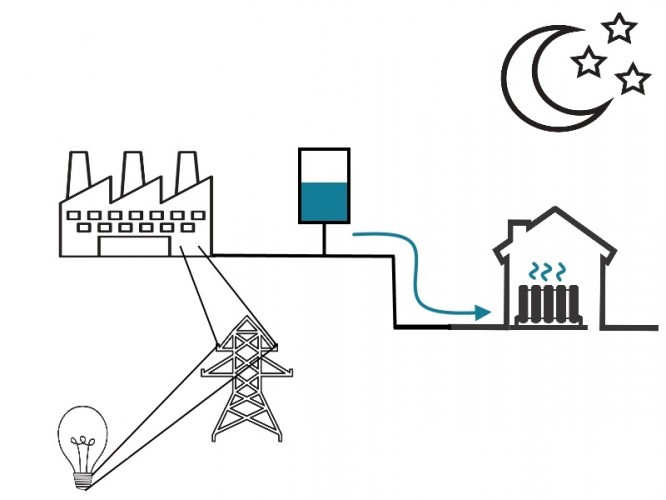 This option should be treated as an emergency one, as the efficiency of power generation in the so-called "pseudocondensation" system in coal-fired power plants is very low, at the level of about 25%. However, in crisis situations it is worth taking into account also this resource, which has the potential to support the NPS with another 300 - 500 MWe of peak capacity.

The development of district heating and cogeneration systems would improve energy efficiency and energy security. It also brings environmental benefits by increasing the efficiency of energy production. A new approach to district heating technology requires a broad, holistic view of the energy sector. Meanwhile, there is still a lack of the Energy Policy of the State - a strategic vision for the energy sector. Work on the High Efficiency Cogeneration Act is very reluctant, and its objectives are not ambitious.

It is worth preparing a comprehensive action plan for district heating. It is to be hoped that the Energy Policy of Poland until 2050 will include in its assumptions optimization of resource use, improvement of air quality and maximization of social benefits. Then the heat supply sector will reveal its true potential there.